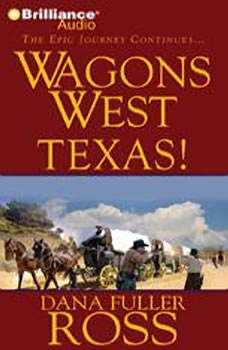 TEXAS! 1844. The bold new Republic of Texas is fighting for its life. Rallying to the cause of liberty, the brave pioneers who forged the Oregon Trail are called upon to lead a new wagon train into the fray. Leaving their homes in the thriving Oregon Territory, they face impossible odds on the wild Texas frontier, overrun with dangerous outlaws, native tribes, and the powerful Mexican Army. Among the freedom fighters are veteran commander Lee Blake and his wife Kathy, boat builder Harry Canning, and the fearless volunteers who would risk their lives as Texas Rangers. Their new leader, Captain Rick Miller, holds the destiny of Texas in his hands. But in his heart, he hides a passion for a woman he cannot have — and a dream he cannot surrender. This is the fight for Texas, in all its grit, glory, and grandeur. This is America at its best…

The Lonesome Gods
by Louis L'Amour

“I am Johannes Verne, and I am not afraid.” This was the boy’s mantra as he plodded through the desert alone, left to die by his vengeful grandfather. Johannes Verne was soon to be rescued by outlaws, but no one could save him...