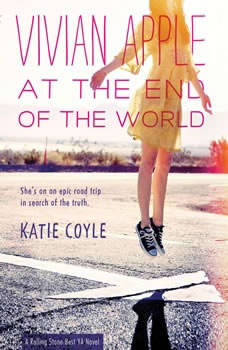 Vivian Apple at the End of the World

Part 1 of the Vivian Apple series. Seventeen-year-old Vivian Apple never believed in the evangelical Church of America, unlike her recently devout parents. But when Vivian returns home the night after the supposed 'Rapture,' all that's left of her parents are two holes in the roof. Suddenly, she doesn't know who or what to believe. With her best friend Harp and a mysterious ally, Peter, Vivian embarks on a desperate cross-country roadtrip through a paranoid and panic-stricken America to find answers. Because at the end of the world, Vivan Apple isn't looking for a savior. She's looking for the truth. Starred review. "...impressive...(a) smart, sober novel...Don’t be misled by the sunny title and cover image: this is a gritty, often troubling work that is nevertheless infused with humor and heart." - Booklist