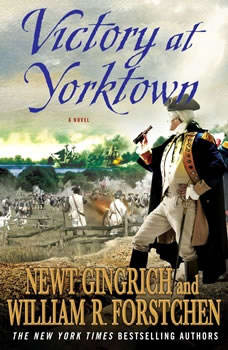 New York Times bestselling authors Newt Gingrich's and William R. Forstchen's George Washington series continues-a novel about faith, leadership, and the triumph of the American causeIt is 1781, and Washington and his army have spent three years in a bitter stalemate, engaging in near constant skirmishing against the British. The enemy position in New York City is too strong, all approaches blocked by the Royal Navy. At last, two crucial reports reach Washington. The first is that the French have briefly committed a fleet to the American coast. The second is that British General Cornwallis, driven to distraction by protracted warfare in the Carolinas, has withdrawn into Yorktown. Washington decides to embark on one of the most audacious moves in American military history. He will force-march nearly his entire army south more than three hundred miles, in complete secrecy, counting on a blockade of the Chesapeake Bay by the French navy, fall upon Cornwallis, and capture his entire force. It is a campaign ladened with "ifs" but the stalemate must be broken, otherwise America, after six long years of war, will crumble.Sgt. Peter Wellsley must pave the way for the army, neutralizing any loyalists who might provide warning. On the other side, Allen Van Dorn receives reports from civilians that something is afoot and is tasked to find out what. As Wellsley moves to block any leaks, Van Dorn tries to penetrate the screen. When one of the former friends is captured, both must decide where their true loyalties lie during the heat of the Battle of Yorktown, as Washington's professional army, once a "rabble in arms," executes the war's most decisive contest.With Victory at Yorktown, critically acclaimed authors Newt Gingrich and William R. Forstchen have reached the pinnacle of their talents in a tour de force narrative of one of America's most important heroes.