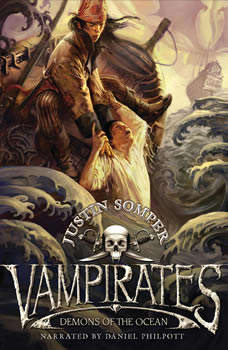 Vampirates: Demons of the Ocean

Vampirates is a colorful extravaganza with a wildly eccentric cast and lashings of swashbuckling adventure, punctuated with horror and old-school romance. Conor and Grace are twins, recently orphaned after their widowed father's death. Rather than being adopted by the town's busy-bodies, they decide to set sail for new pastures in their father's last single possession, his sailing boat. But a vicious storm sees their boat capsize and the twins are separated. Two mysterious ships sail to their rescue - each picking up one twin before disappearing into the mist. Conor wakes to find himself on a pirate ship and is soon being trained up with a cutlass. Meanwhile Grace finds herself locked in a darkened room, as the vampirates wait for night to fall and their feasting to begin...Determined to find each other, yet intrigued by their new shipmates, the twins are about to embark on the biggest adventure of their life.

Vampirates: Demons of the Ocean
The Vampirates series #1