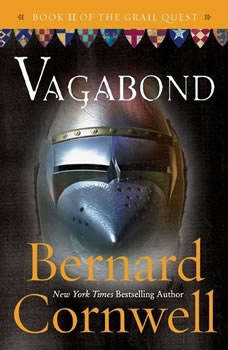 1347 is a year of war and unrest. England's army is fighting in France, and the Scots are invading from the North. Thomas of Hookton, sent back to England to follow an ancient trail to the Holy Grail, becomes embroiled in the fighting at Durham. Here, he meets a new and sinister enemy, a Dominican Inquisitor, who, like all of Europe, is searching for Christendom's most holy relic. It is not certain the grail even exists, but no one wants to let it fall into someone else's hands. And though Thomas may have an advantage in the search—an old notebook left to him by his father seems to offer clues to the whereabouts of the relic—his rivals, inspired by a fanatical religious fervor, have their own ways: the torture chamber of the Inquisition. Barely alive, Thomas is able to escapes their clutches, but fate will not let him rest. He is thrust into one of the bloodiest fights of the Hundred Years War, the battle of la Roche-Derrien and, amidst the flames, arrows and butchery of that night he faces his enemies once again.