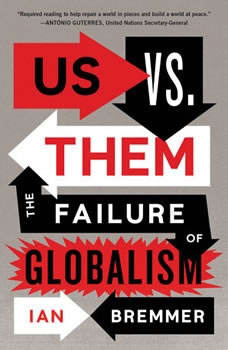 Us vs. Them: The Failure of Globalism

"A cogent analysis of the concurrent Trump/Brexit phenomena and a dire warning about what lies ahead...a lucid, provocative book." --Kirkus Reviews

Those who championed globalization once promised a world of winners, one in which free trade would lift all the world's boats, and extremes of left and right would give way to universally embraced liberal values. The past few years have shattered this fantasy, as those who've paid the price for globalism's gains have turned to populist and nationalist politicians to express fury at the political, media, and corporate elites they blame for their losses.

The United States elected an anti-immigration, protectionist president who promised to "put America first" and turned a cold eye on alliances and treaties. Across Europe, anti-establishment political parties made gains not seen in decades. The United Kingdom voted to leave the European Union.

And as Ian Bremmer shows in this eye-opening book, populism is still spreading. Globalism creates plenty of both winners and losers, and those who've missed out want to set things right. They've seen their futures made obsolete. They hear new voices and see new faces all about them. They feel their cultures shift. They don't trust what they read. They've begun to understand the world as a battle for the future that pits "us" vs. "them."

Bremmer points to the next wave of global populism, one that hits emerging nations before they have fully emerged. As in Europe and America, citizens want security and prosperity, and they're becoming increasingly frustrated with governments that aren't capable of providing them. To protect themselves, many government will build walls, both digital and physical. For instance...
*  In Brazil and other fast-developing countries, civilians riot when higher expectations for better government aren't being met--the downside of their own success in lifting millions from poverty.
*  In Mexico, South Africa, Turkey, Indonesia, Egypt and other emerging states, frustration with government is on the rise and political battle lines are being drawn.
*  In China, where awareness of inequality is on the rise, the state is building a system to use the data that citizens generate to contain future demand for change
*  In India, the tools now used to provide essential services for people who've never had them can one day be used to tighten the ruling party's grip on power.

When human beings feel threatened, we identify the danger and look for allies. We use the enemy, real or imagined, to rally friends to our side. This book is about the ways in which people will define these threats as fights for survival. It's about the walls governments will build to protect insiders from outsiders and the state from its people.

And it's about what we can do about it.