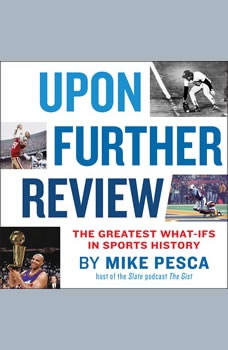 Upon Further Review: The Greatest What-Ifs in Sports History

Now a New York Times bestseller!"Intriguing...thought provoking...delightful." --The Washington Post From Mike Pesca, host of the popular Slate podcast The Gist, comes the greatest sports minds imagining how the world would change if a play, trade, injury, or referee's call had just gone the other way. No announcer ever proclaimed: "Up Rises Frazier!" "Havlicek commits the foul, trying to steal the ball!" or "The Giants Lose the Pennant, The Giants Lose The Pennant!" Such moments are indelibly etched upon the mind of every sports fan. Or rather, they would be, had they happened. Sports are notoriously games of inches, and when we conjure the thought of certain athletes - like Bill Buckner or Scott Norwood - we can't help but apply a mental tape measure to the highlight reels of our minds. Players, coaches, and of course fans, obsess on the play when they ask, "What if?" Upon Further Review is the first book to answer that question.Upon Further Review is a book of counterfactual sporting scenarios. In its pages the reader will find expertly reported histories, where one small event is flipped on its head, and the resulting ripples are carefully documented, the likes of... What if the U.S. Boycotted Hitler's Olympics? What if Bobby Riggs beat Billie Jean King? What if Bucky Dent popped out at the foot of the Green Monster?What if Drew Bledsoe never got hurt? Upon Further Review takes classic arguments conducted over pints in a pub and places them in the hands of dozens of writers, athletes, and historians. From turning points that every sports fan rues or celebrates, to the forgotten would-be inflection points that defined sports, Upon Further Review answers age old questions, and settles the score, even if the score bounced off the crossbar.

“How can the NCAA blithely wreck careers without regard to due process or common fairness? How can it act so ruthlessly to enforce rules that are so petty? Why won’t anybody stand up to these outrageous violations of American value...

From Jackie Robinson to Muhammad Ali and Arthur Ashe, African American athletes have been at the center of modern culture, their on-the-field heroics admired and stratospheric earnings envied. But for all their money, fame, and achievement, says for...

Sports media superstar Clay Travis wants to save sports from the social justice warriors seeking to turn them into another political battleground.Have you ever tuned into your favorite sports highlights show, only to find the talking heads yammerin...

The Heritage
by Howard Bryant

Following in the footsteps of Robeson, Ali, Robinson and others, today's Black athletes re-engage with social issues and the meaning of American patriotismIt used to be that politics and sports were as separate from one another as church and state. ...

Bestselling author Queenan explores the world of sports fans in an attempt to understand the inexplicable: What does anyone get out of it?For Yankee, Cowboy, and Laker fans the answer is fairly clear: the return on investment is relatively high. But...

We Matter
by Etan Thomas

Sports in America
by James A. Michener

Originally published in 1976, James A. Michener’s explosive, spectacular Sports in America is a prescient examination of the crisis in American sports that is still unfolding to this day. Pro basketball players are banned for narcotics use, wh...

The Professor in the Cage
by Jonathan Gottschall

When a mixed martial arts (MMA) gym moves in across the street from his office, Jonathan Gottschall sees a challenge, and an opportunity. Pushing forty, out of shape, and disenchanted with his job as an adjunct English professor, part of him yearns ...

Knowing the Score
by David Papineau

In Knowing the Score, philosopher David Papineau uses sports to illuminate some of modern philosophy's most perplexing questions. As Papineau demonstrates, the study of sports clarifies, challenges, and sometimes confuses crucial issues in philosop...