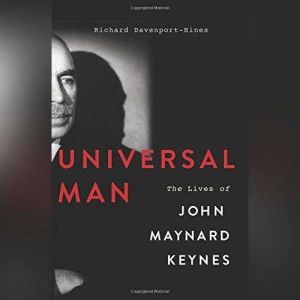 In Universal Man, noted biographer and historian Richard Davenport-Hines revives our understanding of John Maynard Keynes (1883-1946), the twentieth centurys most charismatic and revolutionary economist. Keynes helped FDR launch the New Deal, saved Britain from financial crisis twice over the course of two World Wars, and instructed Western nations on how to protect themselves from revolutionary unrest, economic instability, high unemployment, and social dissolution. Isaiah Berlin called Keynes "the cleverest man I ever knew"both "superior and intellectually awe-inspiring." Eric Hobsbawm, the twentieth centurys preeminent historian, considered him as influential as Lenin, Stalin, Roosevelt, Hitler, Churchill, Gandhi, and Mao. Keynes was nothing less than the Adam Smith of his time: his General Theory of Employment, Interest and Money, published in 1936, became the most important economics book of the twentieth century, as important as Smiths Wealth of Nations in inaugurating an economic era. Keyness brilliant ideas made possible 35 years of prosperity after the Second World War, the most sustained period of rapid expansion in history. And now, and in the wake of the 2008 global economic collapse, he is once again shaping our world. Every day, we are likely to hear about "Keynesian economics" or the "Keynesian Revolution," terms that testify to his continuing influence on both economic theory and government policies. Indeed, with the thorough discrediting of his opponentsFriedrich Hayek, Milton Friedman, Alan Greenspan, and other supporters of the notion that capitalism is self-regulating, and needs no government interventionnations across the world are turning to Keyness signature innovations: above all that governments must involve themselves in their economies to stave off financial collapse. Previous biographies have explored Keynes economic thought at great length and often in the jargon of the discipline. Universal Man is the first accessible biography of Keynes, and reveals Keynes as much more than an economist. Like many Englishmen of his class and era, Keynes compartmentalized his life. Accordingly, Davenport-Hines views Keynes through multiple windows, as a youthful prodigy, a powerful government official, an influential public man, a bisexual living in the shadow of Oscar Wildes persecution, a devotee of the arts, and an international statesman of great renown. Delving into Keyness experiences and thought, Davenport-Hines shows us a man who was equally at ease socialising with the Bloomsbury Group as he was persuading heads of state to adopt his policies. Exploring the desires and experiences that compelled Keynes to innovate, Davenport-Hines is the first to argue that Keynesian economics has an aesthetic basis. In this book we come to understand not just the most enduringly influential economist of the modern era, but one of the most gifted and vital men of our times: a disciplined logician with a capacity for glee who persuaded people, seduced them, subverted old ideas, and installed new ones; a man whose high brilliance did not give people vertigo, but clarified and lengthened their perspectives. Engaging, learned, and sparkling with wit and insight, Universal Man is the perfect match for its subject.