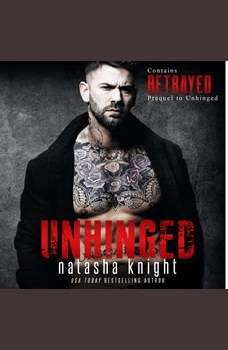 But he's back. Risen, like Lazarus, from the dead. And he's dark. Darker than he was before. Dangerous. Unhinged. A scarred, tattooed savage.

The way he looks at me should terrify me, but I'm drawn to him, to his intensity. Consumed by it. By him. Even though I know if I'm not careful, his obsession will destroy me.

I should have died that night two years ago. My mistake cost my men their lives. It should have cost me mine. But I survived. And the day I learned she did too, I made it my mission to find her.

I sought her out. Tracked her. Shadowed her every move. I've been inside her house. Eaten her food. Drank her liquor. I've stood beside her bed and watched her sleep.

She has so many secrets, and I know one of them. It's the one where our pasts collided. The one that destroyed me.

And it's the reason I've come for her.

Note: This recording includes Betrayed the prequel to Unhinged.