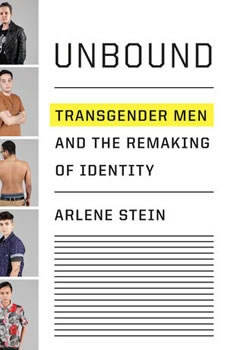 Unbound: Transgender Men and the Remaking of Identity

Award-winning sociologist Arlene Stein takes us into the lives of four strangers who find themselves together in a sun-drenched surgeon’s office, having traveled to Florida from across the United States in order to masculinize their chests. Ben, Lucas, Parker, and Nadia wish to feel more comfortable in their bodies; three of them are also taking testosterone so that others recognize them as male. Following them over the course of a year, Stein shows how members of this young transgender generation, along with other gender dissidents, are refashioning their identities and challenging others’ conceptions of who they are. During a time of conservative resurgence, they do so despite great personal costs.

Transgender men comprise a large, growing proportion of the trans population, yet they remain largely invisible. In this powerful, timely, and eye-opening account, Stein draws from dozens of interviews with transgender people and their friends and families, as well as with activists and medical and psychological experts. Unbound documents the varied ways younger trans men see themselves and how they are changing our understanding of what it means to be male and female in America.

Listen, We Need to Talk
by Brian F. Harrison

American public opinion tends to be sticky. Although the news cycle might temporarily affect the public's mood on contentious issues like abortion, the death penalty, or gun control, public opinion toward these issues has remained remarkably constan...

The Lavender Scare shatters the myth that homosexuality has only recently become a national political issue, changing the way we think about both the McCarthy era and the origins of the gay rights movement.

Out In Time
by Perry N. Halkitis

The civil rights of LGBTQ people have slowly yet steadily strengthened since the Stonewall Riots of June, 1969. Despite enormous opposition from some political segments and the catastrophic effects of the AIDS crisis, the last five decades have witn...

A transgender reporter's narrative tour through the surprisingly vibrant queer communities sprouting up in red states, offering a vision of a stronger, more humane America.Ten years ago, Samantha Allen was a suit-and-tie-wearing Mormon missionary. ...

In early 2013 same-sex marriage was legal in only ten states and the District of Columbia. That year the Supreme Court's decision in United States v. Windsor appeared to open the door to marriage equality. In Texas, Mark Phariss and Vic Holmes, toge...

In Trans Like Me, CN Lester takes listeners on a measured, thoughtful, intelligent yet approachable tour through the most important and high-profile narratives around the trans community, turning them inside out and examining where we really are in ...

In 2014, Time magazine announced that America had reached "the transgender tipping point," suggesting that transgender issues would become the next civil rights frontier. Years later, many people—even many LGBTQ allies—still lack underst...