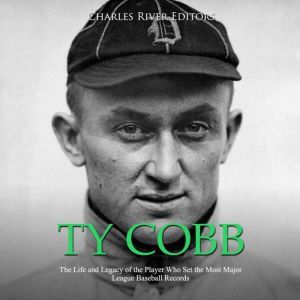 Ty Cobb: The Life and Legacy of the Player Who Set the Most Major League Baseball Records

"I had to fight all my life to survive. They were all against me, but I beat the bastards and left them in the ditch." – Ty Cobb

"Cobb is a prick. But he sure can hit. God Almighty, that man can hit." – Babe Ruth

As one of America’s oldest and most beloved sports, baseball has long been touted as the national pastime, but of all the millions of people who have played it over the last few centuries, few have influenced Major League Baseball like Ty Cobb, whose career spanned over 20 seasons. The Georgia Peach overcame early hardships to set nearly 100 MLB records in his time as a player and player-manager for the Detroit Tigers and Philadelphia Athletics. With an MVP and Triple Crown under his belt by the age of 25, Cobb went on to produce statistics that still lead MLB in several categories, including 4,065 combined runs scored and RBIs, a career batting average over .365, and at least 11 batting titles. In cases where he’s no longer the record holder, it would take decades for players like Pete Rose to play in more games and collect more at bats and hits, for Rickey Henderson to score as many runs, and for Lou Brock to steal more bases.

Even Americans who are relatively unfamiliar with baseball’s storied history have likely heard of Ty Cobb and can recognize him as one of the sport’s all time greats, but today his legacy is better known for controversy. In his day, Cobb was cast as a villain by fans of teams he played against, but he was portrayed in flattering manners shortly after his death. Things changed when other contemporary accounts came out and cast him as a vile racist, among other personal failings, much of which can be credited to the writing of sportswriter Al Stump and the modern biopic Cobb, released in 1994. It has only been recently that modern historians have pushed back a bit on those portrayals of Cobb and attempted to depict him in a more balanced light.