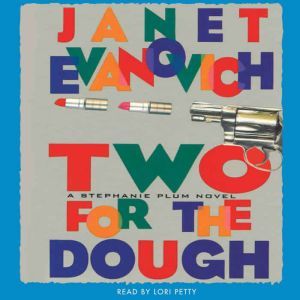 Two for the Dough: A Stephanie Plum Novel

Janet Evanovich's first Stephanie Plum outing, the Dilys award-winning One for the Money, was afinalist for the Edgar, Anthony, Agatha, Shamus, and Macavity awards, and was named the book "most funto sell" by the Independent Mystery Booksellers of America in 1994. Now she once again takes to the meanstreets of Trenton, armed with attitude (not to mention stun guns, defense sprays, killer flashlights, andher untrustworthy .38) to find Kenny Mancuso, who recently left the army, inadvertently shot his bestfriend, and is on the run in violation of a bond.Aided by her tough bounty hunter coach and her irrepressible Grandma Mazur, Stephanie once again forms arocky alliance with fast-talking, slow-handed vice cop Joe Morelli for the tumultous chase through backalleys and Grandma's favorite funeral parlors.Witty, fresh, and full of surprises, Two for the Dough is the Stephanie Plum sequel fans have beenwaiting for.