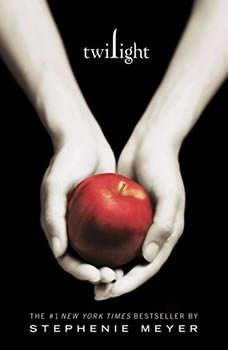 About three things I was absolutely positive:
First, Edward was a vampire.
Second, there was a part of him–and I didn’t know how dominant that part might be–that thirsted for my blood.
And third, I was unconditionally and irrevocably in love with him.

“I’D NEVER GIVEN MUCH THOUGHT TO HOW I WOULD DIE– I’d had reason enough in the last few months –but even if I had, I would not have imagined it like this. . . . Surely it was a good way to die, in the place of something else, someone I loved. Noble, even. That ought to count for something.”
When Isabella Swan moves to the gloomy town of Forks and meets the mysterious, alluring Edward Cullen, her life takes a thrilling and terrifying turn. With his porcelain skin, golden eyes, mesmerizing voice, and supernatural gifts, Edward is both irresistible and impenetrable. Up until now, he has managed to keep his true identity hidden, but Bella is determined to uncover his dark secret.
What Bella doesn’t realize is the closer she gets to him, the more she is putting herself and those around her at risk. And, it might be too late to turn back. . . .
Deeply seductive and extraordinarily suspenseful, Twilight will have readers riveted right until the very last page is turned.

This book is amazing. It really makes you remember what new love is. Ive read this book a few times and i am sure i will read it more.

I wanted to listen to this book due to the premisebefore my middle school girls got hold of it, and I was surprised that it was a very good read. The vocab is a little challenging for 7th grade, however the words in context imply the meaning which is a great enhancement for the coming SAT's. The ending is weak, like many series, but I am moving on to books 2 and 3 to see what happens to Bella and I think my girls will do the same. Don't be put off by vampires... it is a traditional good vs evil theme and so far good wins out. Bella tells the truth and when faced with moral dilema chooses to do what is right. Hope this is helpful for all of you out there! p.s. There is sexual tension but so far only 2 short kisses since Edward can't be close to Bella Can you guess why?

I expected more from a book that has proven both popular and on the reading lists. It was both an ALA Best Book for Young Adults 2006 and an ALA Ten Best Books for Young Adults. I'm a Buffy fan, but I found this rather tedious. Typical female in danger leads to closeness between the protagonist and her vampire paramour. Typical he acts like a complete ******* because he really likes her situation. Very harlequin and very sub-standard when it comes to writing.

3 stars was the best I could do. I found the heroine annoyingly shallow. I had to remind myself that she was only 17 and that the book was written for teens, not adults. While Bella's silly obsession with Edward made me grit my teeth, at least I wasn't having to plow through hard core sex scenes like what's forced down your throat in adult romance. A tradeoff, I guess. Adult readers,like me may have a bit of trouble understanding the 5 star ratings, but it is a pretty good story if you don't expect the protagonist to be a good role model for the target audience.I doubt that I'll bother looking for books 2 or 3 in the series.

This book is a really good first book to a great series. It introduces characters that teenagers my age might be able to relate to. It is different from the books I usually read, but I am glad I read it. It is a book that you will want to read more than once. Twilight is just that good.