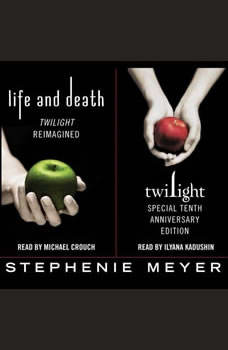 Celebrate the tenth anniversary of Twilight! This special double-feature audiobook by Stephenie Meyer includes the classic novel, Twilight, read by Ilyana Kadushin, and a bold and surprising reimagining, Life and Death, read by Michael Crouch.

This new edition features over 16 hours of new content, and listeners will relish experiencing the deeply romantic and extraordinarily suspenseful love story of Bella and Edward through fresh eyes.

Twilight has enraptured millions of readers since its first publication in 2005 and has become a modern classic, redefining genres within young adult literature and inspiring a phenomenon that has had readers yearning for more. The novel was a #1 New York Times bestseller, a #1 USA Today bestseller, a Time magazine Best Young Adult Book of All Time, an NPR Best-Ever Teen Novel, and a New York Times Editor’s Choice. The Twilight Saga also includes New Moon, Eclipse, Breaking Dawn, and The Short Second Life of Bree Tanner: An Eclipse Novella, all available on audio from Listening Library.

The Coldest Girl in Coldtown
by Holly Black

The Short Second Life of Bree Tanner
by Stephenie Meyer