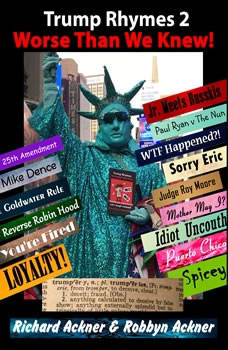 Trump Rhymes 2-Worse Than We Knew

Approximately one year after Trump was inaugurated and it feels like 10. The horror we felt at Donald J Trump being elected, is like a sunny walk in the park compared to him actually being President. The incompetent staff, the complicit adult children, the gang of destroyers masquerading as cabinet secretaries. To quote his own economic adviser, Gary Cohn, "Trump is less a person then a collection of terrible traits, none of which is suited to being President." These poems are our attempt to cope with it, cheaper then psychiatry, healthier than heavy drinking. (We’ve cut back to moderate drinking). We do hope these poems bring you some much needed laughter. Please enjoy Trump Rhymes 2 "Worse Than We Knew!" Please write a review if you've enjoyed it!!