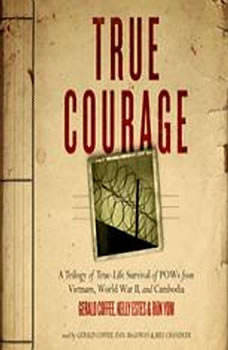 True Courage: A Trilogy of True-Life Survival of POWs from Vietnam, World War II, and Cambodia

Author: Made for Success

Series: Made for Success

Full of action-packed experiences from world conflicts, this collection of war storiessome true, some nottells tales of POWs surviving in Vietnam, World War II, and Cambodia. These stories of grit and strength put you in the middle of the action and will leave you with a respect for true war heroes. Beyond Survivalis a journey into the invincible human spirit that unites heart and mind in a compelling and unforgettable experience. Drawing from his seven years as a POW, Captain Gerald Coffee provides timeless lessons that apply to the physical, emotional, and ethical challenges of everyday life. The Cost of Courage is a work of military fiction based on the true story of two brothers who served in separate campaigns of World War II. After being shot down over Berlin, one brother is forced to endure both mental and physical torture as a POW at Stalag Luft III. As a defiant soul, he gains the respect of his comrades by making life difficult for his captors. However, things change after an ill-fated trip to solitary, where it is revealed by another airman that his brother has died in the Doolittle Raid over Tokyo. Devastated, he struggles with the will to survive while reminiscing about his brother. Tomorrow Im Dead is B?n Yoms story of his capture by the Khmer Rouge at the age of fourteenand the unmatched suffering, courage, and heroism that ensued. After three years as a killing-field slave, seventeen-year-old B?n Yom escaped from the Khmer Rouge and became a freedom fighter. Using his wisdom, courage, and infinite compassion, B?n rescued thousands of Cambodian people and soon became the Cambodian Freedom Fighters greatest soldier. Tomorrow Im Dead is the only known firsthand account of the freedom fighters heroic liberation of slaves from the Khmer Rouge killing fields.

Made for Success Bundle

True Courage: A Trilogy of True-Lif...
Made for Success

Converse with Charisma!
Made for Success

Public Speaking Superstar
Made for Success