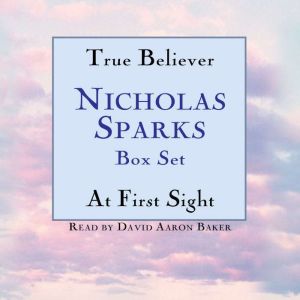 From the world's most beloved chronicler of the heart comes this astonishing story of everlasting love. As a science journalist with a regular column in Scientific American, Jeremy Marsh specializes in debunking the supernatural and has a real nose for the strange and unusual. A born skeptic, he travels to the small town of Boone Creek, North Carolina, determined to find the real cause behind the ghostly apparitions that appear in the town cemetery. What he doesn't plan on, however, is meeting and falling hopelessly in love with Lexie Darnell, granddaughter of the town psychic. Now, if the young lovers are to have any kind of future at all, Jeremy must make a difficult choice: return to the life he knows, or do something he could never do before-take a giant leap of faith. A story about taking chances and following your heart, TRUE BELIEVER will make you, too, believe in the miracle of love.Endings bring new beginnings and tragedies lead to unexpected joy, as the tale begun in True Believer continues with AT FIRST SIGHT. There are a few things Jeremy Marsh was sure he'd never do: He'd never leave New York City; never give his heart away after barely surviving one failed marriage; and never become a parent.Now Jeremy is living in the tiny town of Boone Creek, North Carolina, engaged to Lexie Darnell, the love of his life, and anticipating the start of their family. But just as everything seems to be settling into a blissful pattern, a mysterious e-mail sets off a chain of events that will test the strength of their commitment. Capturing all the heartbreak, tension, and romance of the newly wed, AT FIRST SIGHT explores the love between a man and a woman and between a parent and a child-and reveals an extraordinary truth: that the emotion that can break your heart is sometimes the very one that heals it...