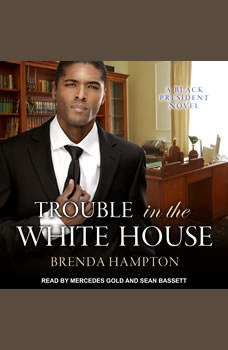 Trouble in the White House: A Black President Novel

President Stephen C. Jefferson is back to shake things up once more. Now that his mistress has been put on ice, he and First Lady Raynetta Jefferson seem to be back on track. She has managed to hurdle over her husband's affairs, but her mother-in-law continues to be the real thorn in her side. The two women want the president to choose whose side he's on, but President Jefferson has his mind on his job. Sweeping gun-control legislation has been passed, and terrorism is being dealt with in a major way. The president is riding high from his multiple accomplishments, until he's told about a son he never knew he had, a son who has been classified as a dangerous terrorist. The shocking news brings the president to his knees. His trials and tribulations are more difficult than any he could have ever imagined. His world is crumbling right before his eyes, and a lonely, vengeful first lady is not the one he needs by his side. Neither is the Secret Service, and when an agent decides to make a move toward the first lady, mayhem erupts in the White House like never, ever before. Contains mature themes.

Trouble in Rio
by M.T. Pope

What Kind of Man Would I Be
by Blake Karrington