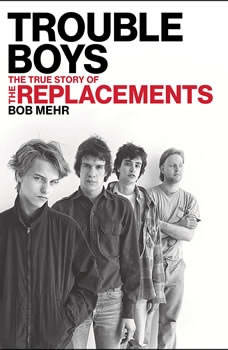 Trouble Boys: The True Story of the Replacements

Based on all-new interviews and including 72 rare photos, Trouble Boys: The True Story of the Replacements is the definitive boigraphy of one of the last great rock 'n' roll bands of the twentieth century. Written with the participation of the group's key members, including reclusive singer-songwriter Paul Westerberg, bassist Tommy Stinson, and the family of late guitarist Bob Stinson, Trouble Boys is a deeply intimate and nuanced portrait, exposing the primal factors and forces--addiction, abuse, fear--that would shape one of the most brilliant and notoriously self-destructive bands of all time.Based on a decade of research and reporting, hundreds of interviews (with family, friends, managers, producers, and musical colleagues), as well as full access to the Replacements' archives at Twin/Tone and Warner Bros. Records, author Bob Mehr has fashioned something far more compelling than a conventional band bio.A roaring rock 'n' roll adventure, a heartrending family drama, and a cautionary showbiz tale, Trouble Boys is a penetrating work of biography and a major addition to the rock book canon.

While the Grohl family had always been musical—the family sang together on long car trips, harmonizing to Motown and David Bowie—Virginia never expected her son to become a musician, let alone a rock star. But when she saw him perform in ...

A witty, revealing, sharply written work of memoir and criticism by the cofounder of Steely DanMusician and songwriter Donald Fagen presents a group of vivid set pieces in his entertaining debut as an author, from portraits of the cultural figures a...

The Wrecking Crew
by Kent Hartman

Closer You Are
by Matthew Cutter

A delicious romp through the heyday of rock and roll and a revealing portrait of the man at the helm of the iconic magazine that made it all possible, with candid look backs at the era from Mick Jagger, Keith Richards, Elton John, Bono, Bruce Spring...

The iconic bassist and co-founder of the Red Hot Chili Peppers tells his fascinating origin story, complete with all the dizzying highs and the gutter lows you'd want from an LA street rat turned world famous rock star.In Acid for the Children, Fle...

Mark Blake draws on his own interviews with band members as well as the group's friends, road crew, musical contemporaries, former housemates, and university colleagues to produce a riveting history of one of the biggest rock bands of all time....

As the lead singer of the Doors, Jim Morrison’s searing poetic vision and voracious appetite for sexual, spiritual, and psychedelic experience inflamed the spirit and psyche of a generation. Since his mysterious death in 1971, millions more fa...

In This Is All a Dream We Dreamed, two of the most well-respected chroniclers of the Dead, Blair Jackson and David Gans, reveal the band’s story through the words of its members, their creative collaborators and peers, and a number of diverse ...