Tribulation Force: The Continuing Drama of Those Left Behind

Left Behind thrilled millions of readers with its apocalyptic visions and fast-paced suspense. Now Tribulation Force joins it in the stunning continuation of a prophetic battle against the enemies of God. In an instant, millions of people have vanished from Earth. Those left behind scramble to find the cause of this massive disappearance. In their desperation, they fall under the spell of Nicolae Carpathia, a charismatic leader, who vows to bring all religions, governments, and economic systems together. But underneath his promise to unite the world lurks a force of great evil. Can a group of four men and women, who call themselves Tribulation Force, find the strength to topple this wicked foe? As they draw on their shared faith in Christ, the challenge becomes one that could alter the fate of all humankind. Narrator Richard Ferrone conveys the spiritual and physical conflicts, sweeping you into a world teetering on the brink of destruction. 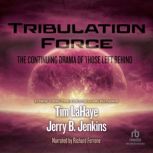