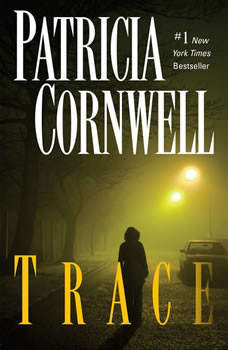 Dr. Kay Scarpetta, now freelancing from south Florida, returns to the city that turned its back on her five years ago.

In Trace, Scarpetta travels to Richmond, Virginia, at the odd behest of the recently appointed Chief Medical Examiner, who claims that he needs her help to solve a perplexing crime. When she arrives, however, Scarpetta finds that nothing is as she expected: her former lab is in the final stages of demolition; the inept chief isn't the one who requested her after all; her old assistant chief has developed personal problems that he won't reveal; and a glamorous FBI agent, whom Marino dislikes instantly, meddles with the case.

Deprived of assistance from colleagues Benton and Lucy, who are embroiled in what first appears to be an unrelated attempted rape by a stalker, Scarpetta is faced with investigating the death of a fourteen-year-old girl, working with the smallest pieces of evidence-traces that only the most thorough hunters can identify. She must follow the twisting leads and track the strange details in order to make the dead speak-and to reveal the sad truth that may be more than even she can bear.