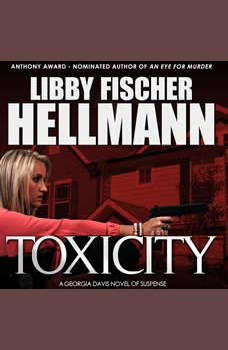 A dark thriller and police procedural from best-selling crime writer Libby Fischer Hellmann. When three bodies turn up in rapid succession, all in landfills or waste disposal dumpsters, rookie cop Georgia Davis is drawn into the investigation. Teaming up with her detective boyfriend Matt and his friend Detective Sergeant John Stone, Georgia must work out who’s responsible for the killings, but there’s little evidence to go on. Complicating the situation is the daughter of a real estate mogul, who also happens to have her eye on Matt. Fans of Hellmann’s Deftly weaving emotional pressure into an engaging plot ToxiCity is a must-read addition to the libraries of crime fiction enthusiasts the world over.

Toxicity is as gritty as it is spellbinding. It draws the reader inexorably into a web of deceit, heart-crushing loss, and righteous fury… A stunning and satisfying conclusion. J. Carson Black, Best-selling author of Darkness on the Edge of Town

Anybody that loves police procedurals written tautly, with grit and a healthy dose of noir, will love this one…her Georgia Davis series may just be one of the best crime thriller series being written today. The Seattle Post-Intelligencer

I was blown away once I began reading. I literally couldn’t put the book down… Think CSI meets Erin Brockovich… F. Murrell

Hellmann writes with the economy and emotional punch of classic crime novelists like Lawrence Block. And she has created a perpetrator who is complex, realistic and completely unexpected…Peg Rorbarchek