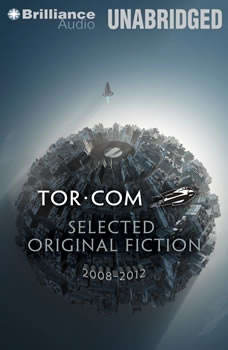 This outstanding collection of short stories features some of the best of Tor.com original fiction, in audio for the first time. Written for and originally published exclusively on Tor.com, this audiobook includes Nebula and World Fantasy Award-nominated short stories, brand-new fiction from bestselling authors, and tales that feature characters and worlds that listeners already know and love.In this unique story collection, listeners will enjoy fiction from Sylvia Day, John Scalzi, Brandon Sanderson, and many others. The collection includes:“Earth Hour” by Ken MacLeod“Eve of Sin City” by Sylvia Day, featuring Evangeline Hollis of the Marked series “The President’s Brain is Missing” by John Scalzi“Overtime” by Charles Stross, set in the world of The Laundry Files“Firstborn” by Brandon Sanderson“Down on the Farm” by Charles Stross, set in the world of The Laundry Files“After the Coup” by John Scalzi“The Finite Canvas” by Brit Mandelo “Swift, Brutal Retaliation” by Meghan McCarron“Portrait of Lisane da Patagnia” by Rachel Swirsky