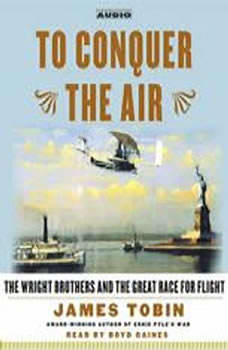 To Conquer the Air: The Wright Brothers and the Great Race for Flight

"For some years I have been afflicted with the belief that flight is possible to man. My disease has increased in severity and I feel that it will soon cost me an increased amount of money if not my life." So wrote a quiet young Ohioan in 1900, one in an ancient line of men who had wanted to fly -- wanted it passionately, fecklessly, hopelessly. But at the turn of the twentieth century, Wilbur Wright and a scattered handful of other adventurers conceived a conviction that the dream lay at last within reach, and in a headlong race across ten years and two continents, they competed to conquer the air. James Tobin, winner of the National Book Critics Circle Award in biography, has at last given this inspiring story its definitive telling. For years Wright and his younger brother, Orville, experimented in utter obscurity. Meanwhile, the world watched as the imperious Samuel Langley, armed with a rich contract from the U.S. War Department and all the resources of the Smithsonian Institution, sought to create the first manned flying machine. While Langley became obsessed with flight as a problem of power, the Wrights grappled with it as a problem of balance. Thus their machines took two very different paths -- one toward oblivion, the other toward the heavens. To Conquer the Air is a hero's tale of overcoming obstacles within and without. It is the story of mankind's most wondrous technological achievement; and it is an account of the mystery of creativity and character. Years later, Orville Wright would remark to Charles Lindbergh: "No one quite understands the spirit and conditions of those times." In the centennial year of human flight, To Conquer the Air is itself a heroic achievement.