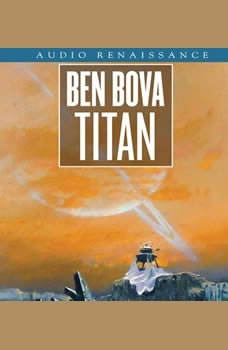 Master storyteller Ben Bova continues his multi-volume "Grand Tour" saga chronicling humanity's exploration of near space with TITAN, a fast-paced thriller focused on the first manned mission to the Solar System's most intriguing world. Skillfully blending high drama, passionate characters and daring speculation with the latest discoveries from the current Cassini/Huygens probe of Saturn's moon, Bova has crafted a heart-stopping tale of epic adventure on mankind's next frontier.The gigantic colony ship Goddard has at last made orbit around the ringed planet Saturn, carrying a volatile population of more than 10,000 dissidents, rebels, extremists and visionaries seeking a new life among the stars. Chief scientist Edouard Urbain's avowed mission is to study the enigmatic moon called Titan, which offers the tantalizing possibility that life may exist amid its windswept islands and chill black seas.But when the exploration vessel Titan Alpha mysteriously fails after reaching the moon's surface, long buried tensions surface among the colonists. Torn by political intrigue, suspicious accidents, and an awesome discovery that could threaten human space exploration, a handful of courageous men and women must fight for the survival of their colony, and the destiny of the human race.

Home Is where The Hero Is
by Timothy Ellis

The Deadliest of Intentions
by Marc Stevens