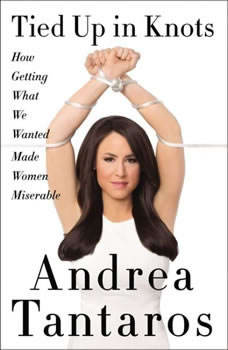 Tied Up in Knots: How Getting What We Wanted Made Women Miserable

Fifty years after Betty Friedan unveiled The Feminine Mystique, relations between men and women in America have never been more dysfunctional. If women are more liberated than ever before, why aren't they happier? In this shocking, funny, and bluntly honest tour of today’s gender discontents, Andrea Tantaros, one of Fox News' most popular and outspoken stars, exposes how the rightful feminist pursuit of equality went too far, and how the unintended pitfalls of that power trade have made women (and men!) miserable.In a covetous quest to attain the power that men had, women were advised to work like men, talk like men, party like men, and have sex like men.  There’s just one problem: women aren’t men. Instead of feeling happy with their newfound freedoms, females today are tied up in knots, trying to strike a balance between their natural, feminine and traditional desires and what modern society dictates—and demands—through the commandments of feminism. Revealing the mass confusion this has caused among both sexes, Tantaros argues that decades of social and economic progress haven’t brought women the peace and contentedness they were told they'd gain from their new opportunities. The pressure both to have it all and to put forth the perfectly post-worthy, filtered life for social media and society at large has left women feeling twisted. I Meanwhile, in their rightful quest for equality, women have promoted themselves at the expense of their male counterparts, leaving both genders frayed and frustrated. In this candid and humorous romp through the American cultural landscape, Tantaros reveals how gaining respect in the office - where women earned it - made them stop demanding it where they really wanted it: in their love lives. The impact of this power trade has been felt in every way, from sex to salaries, to dating and marriage, to fertility and female friendships, to the personal details they share with each other.  As a result, we've lost the traditional virtues and values that we all want, regardless of our politics: intimacy, authenticity, kindness, respect, discretion, and above all commitment. With scathing wit -- and insights born of personal experience -- Tantaros explores how women have taken guys off the hook in dating (much to their own detriment) and exposes how we’ve become a nation averse to intimacy and preoccupied with porn, one that has traded kindness for control, intimacy for sexting, and monogamy for polygamy.  Sorry romance. Sorry decency and manners. Long talks over the telephone have been supplanted by the "belfie."  All this indicates a culture that's devolving, not evolving.  And it’s only getting worse. Tied Up in Knots is a no-holds-barred gut check for the sexes and a wake-up call for a society that has decayed -- faster than anyone thought possible.  It’s time to remember what we all really want out of work, love and life. Only then can we finally begin untying those knots.