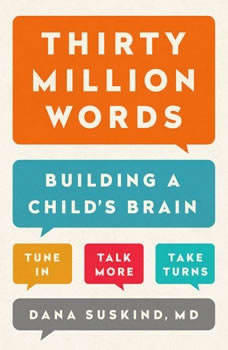 *Nominated for the Books for a Better Life Award*

The founder and director of the Thirty Million Words Initiative, Professor Dana Suskind, explains why the most important—and astoundingly simple—thing you can do for your child’s future success in life is to talk to him or her, reveals the recent science behind this truth, and outlines precisely how parents can best put it into practice.

The research is in: Academic achievement begins on the first day of life with the first word said by a cooing mother just after delivery.

A study by researchers Betty Hart and Todd Risley in 1995 found that some children heard thirty million fewer words by their fourth birthdays than others. The children who heard more words were better prepared when they entered school. These same kids, when followed into third grade, had bigger vocabularies, were stronger readers, and got higher test scores. This disparity in learning is referred to as the achievement gap.

Professor Dana Suskind, MD, learned of this thirty million word gap in the course of her work as a cochlear implant surgeon at University of Chicago Medical School and began a new research program along with her sister-in-law, Beth Suskind, to find the best ways to bridge that gap. The Thirty Million Word Initiative has developed programs for parents to show the kind of parent-child communication that enables optimal neural development and has tested the programs in and around Chicago across demographic groups. They boil down to getting parents to follow the three Ts: Tune in to what your child is doing; Talk more to your child using lots of descriptive words; and Take turns with your child as you engage in conversation. Parents are shown how to make the words they serve up more enriching. For example, instead of telling a child, “Put your shoes on,” one might say instead, “It is time to go out. What do we have to do?” The lab's new five-year longitudinal research program has just received funding so they can further corroborate their results.

The neuroscience of brain plasticity is some of the most valuable and revolutionary medical science being done today. It enables us to think and do better. It is making a difference in the lives of both the old and young.  If you care for children, this landmark book is essential reading.