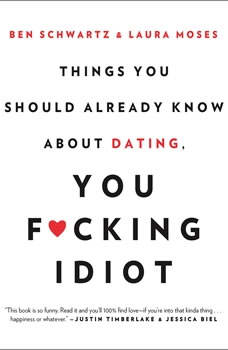 Things You Should Already Know About Dating, You F*cking Idiot

A hilarious illustrated collection of tips for successfully navigating the dating world as a millennial. For single millennials, this situation is all too familiar: You're on a date. It's going well! Then suddenly your date looks at you like you're a f*cking idiot and you never hear from that person again. Guess you're going to die alone, right? Maybe not! Humble authors Ben Schwartz and Laura Moses have written a book to save the future of the human race: Things You Should Already Know About Dating, You F*cking Idiot, a collection of 100 dating tips--complete with illustrations--that teaches clueless guys and girls the dos and don'ts of dating. In their book, Ben and Laura cover all the basics, from "Why are you texting in just Emojis, dummy?!" to "Stop playing games, idiot!" and, of course, "PUT YOUR PHONE DOWN, A**HOLE!" Simply put, this book will make you laugh and finally give you a fighting chance at not dying alone.

The Playbook
by Barney Stinson

Since the dawn of history man has searched for the answer to the most fundamental of questions: "Why am I here . . . not banging chicks?" The search is over. Now, with the help of The Playbook, you'll be able to approach any beautiful woman, discove...

The Book of Leon
by Leon Black

I Had a Nice Time And Other Lies...
by The Betches

The New York Times bestselling authors of Nice Is Just a Place in France and When’s Happy Hour? and creators of the online humor and advice phenomenon Betches.com and Instagram account @Betches explain the brutal truths of how to date like a t...

Drinking and Dating
by Brandi Glanville

Feisty, funny, and almost fabulous: A relationship guide and collection of outrageous dating mishaps from the unfiltered and often inappropriate Real Housewives of Beverly Hills star. Welcome to Drinking and Dating . . . and how social media is rui...

To know the Sweet Potato Queens is to love them, and if you haven't heard about them yet, you will. Since the early 1980s, this group of belles gone bad has been the toast of Jackson, Mississippi, with their glorious annual appearance in the St. Pat...

It's Not Okay
by Andi Dorfman

Andi Dorfman, the beloved finalist of season eighteen of The Bachelor who infamously rejected Juan Pablo and went on to star on season ten of The Bachelorette, dishes about what it’s like to live out a love story—and ...

The Instant New York Times Bestseller He's Just Not That Into You -- based on the popular episode of Sex and the City -- educates otherwise smart women on how to tell when a guy just doesn't like them enough, so they can stop wasting time making ex...

The Bro Code
by Barney Stinson

From the hit TV show How I Met Your Mother comes Barney Stinson’s words of wit, wisdom, and awesomeness, The Bro Code—the New York Times bestseller (really!) with more than a million copies in print all around the world.Everyone’s ...