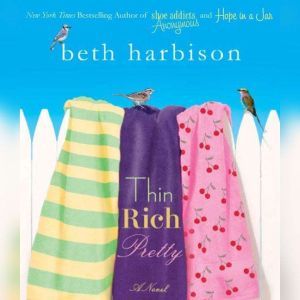 From the New York Times bestselling author of Hope In a Jar, Secrets of a Shoe Addict, and Shoe Addicts Anonymous, comes a novel about old rivalries, deep secrets, and the three things all women wish they were. Twenty years ago, when they were teenagers, Holly and Nicola were the outsiders at summer camp. Holly was the plump one, a dreamer who longed to be an artist. Nicola was the shy, plain one who wanted nothing more than to be beautiful. Their cabin nemesis was Lexi. Rich, spoiled, evil Lexi. One night, Holly and Nicola team up to pull one, daring act of vengeance. But they never dream that this one act will have repercussions that will reach into the future, even twenty years later. And they never realize the secret pain that Lexi holds very close, and how their need for revenge costs Lexi a great deal. Today, Holly is a successful gallery owner, who has put her own artistic dreams on hold. She struggles with her weight and for approval from her constantly-criticizing boyfriend. Nicola, is an almost-famous actress who believes that one little plastic surgery fix is just what she needs to put her over the edge into fame. And Lexi…Lexi is down on her luck and totally broke. Holly will do anything to be thin. Lexi will do anything to be rich. And Nicola will do anything to be pretty. Thin, Rich, Pretty is the story of three women who believe that happiness is the next dress size down, the next dollar figure up, or the next appreciative glance from a stranger. But mostly it's the story of how three women save each other, and show each other the path to true contentment. Told with Beth Harbison's knack for thirty and fortysomething nostalgia, and heartwarming humor, Thin, Rich, Pretty will strike a chord with any woman who has ever got on the scale, looked in the mirror, or the bank, and said, "if only…"