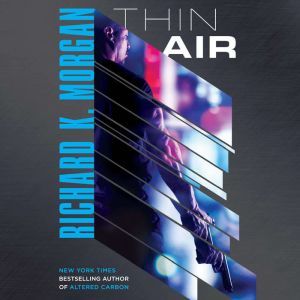 An atmospheric tale of corruption and abduction set on Mars, from the author of the award-winning science fiction novel Altered Carbon, now an exciting new series from Netflix.

From the moment Richard K. Morgan’s dazzling debut, Altered Carbon, burst onto the scene, it was clear that a distinctive new voice had arrived to shake up science fiction. His subsequent novels—including the sequels Broken Angels and Woken Furies—confirmed him as a master of hard-boiled futuristic thrillers. Now Morgan returns to the world of SF noir with a riveting tale of crime, corruption, and deadly crisis on a planet teetering close to the edge.

On a Mars where ruthless corporate interests violently collide with a homegrown independence movement as Earth-based overlords battle for profits and power, Hakan Veil is an ex–professional enforcer equipped with military-grade body tech that’s made him a human killing machine. But he’s had enough of the turbulent red planet, and all he wants is a ticket back home—which is just what he’s offered by the Earth Oversight organization, in exchange for being the bodyguard for an EO investigator. It’s a beyond-easy gig for a heavy hitter like Veil . . . until it isn’t.

When Veil’s charge, Madison Madekwe, starts looking into the mysterious disappearance of a lottery winner, she stirs up a hornet’s nest of intrigue and murder. And the deeper Veil is drawn into the dangerous game being played, the more long-buried secrets claw their way to the Martian surface. Now it’s the expert assassin on the wrong end of a lethal weapon—as Veil stands targeted by powerful enemies hellbent on taking him down, by any means necessary.