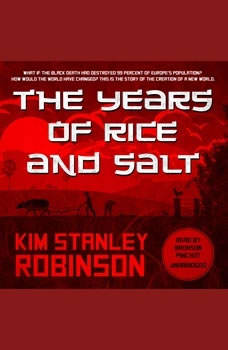 The Years of Rice and Salt

It is the fourteenth century, and one of the most apocalyptic events in human history is set to occurthe coming of the Black Death. History teaches us that a third of Europes population was destroyed. But what if the plague had killed 99 percent of the population instead? How would the world have changed? This is a look at the history that could have beena history that stretches across centuries, a history that sees dynasties and nations rise and crumble, a history that spans horrible famine and magnificent innovation. These are the years of rice and salt. This is a universe where the first ship to reach the New World travels across the Pacific Ocean from China and colonization spreads from west to east. This is a universe where the Industrial Revolution is triggered by the worlds greatest scientific mindsin India. This is a universe where Buddhism and Islam are the most influential and practiced religions, and Christianity is merely a historical footnote. Through the eyes of soldiers and kings, explorers and philosophers, slaves and scholars, Robinson renders an immensely rich tapestry. Rewriting history and probing the most profound questions as only he can, Robinson shines his extraordinary light on the place of religion, culture, power, and even love on such an Earth. From the steppes of Asia to the shores of the Western Hemisphere, from the age of Akbar to the present and beyond, here is the stunning story of the creation of a new world.

This could have been a great book but... the writing style was lacking . after slogging through 300 of the 500+ pages I realized it was not going to suddenly create the magic that keeps me reading. Thats the way of karma , things keep repeating themselves but to read about such tedious lives over and over again was just plain old boring. That with the fact that the author just seemed to end a life when he wrote himself into a hole ... pointless reading. I should have put it down sooner.