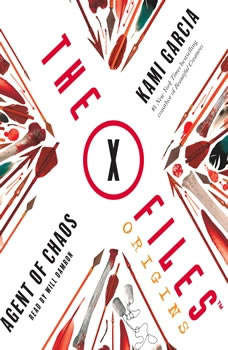 The X-Files Origins: Agent of Chaos

How did Fox Mulder become a believer?Listen to this dark thriller to find out why millions of people became obsessed with The X-Files.In the spring of 1979, seventeen-year-old Fox Mulder has bigger problems than applying for college. Five years ago, his younger sister disap­peared from their home and was never heard from again. Mulder blames himself, and his mother blames his father, who has retreated into his top-secret work for the State Depart­ment. In Fox’s senior year, his dad has moved him to Washington, DC—away from his friends on Martha’s Vineyard. While Mulder doesn’t mind the fresh start and not being known as “that kid with the missing sister,” he’s still obsessed with finding Samantha. So when a local boy turns up dead and another child is abducted, Mulder can’t stop himself from getting involved. Could there be a link to his sister’s case? As he uncovers the truth, Mulder and his friends find themselves on the trail of a serial killer. Sucked into a world where conspiracies, the occult, and madness overlap, Fox Mulder starts to believe.

Death of a Cheerleader
by Micol Ostow

Werewolf in Riverdale
by Caleb Roehrig

Star Wars The High Republic: Into the...
by Claudia Gray