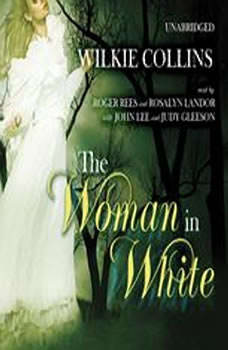 The Woman in White

Winner of the 2011 Audie Award in the Classic Category There, in the middle of the broad, bright highroadthere, as if it had that moment sprung out of the earth or dropped from the heavenstood the figure of a solitary woman, dressed from head to foot in white garments.from the book

Thus young Walter Hartright first meets the mysterious woman in white in what soon became one of the most popular novels of the nineteenth century. Secrets, mistaken identities, surprise revelations, amnesia, locked rooms and locked asylums, and an unorthodox villain made this mystery thriller an instant success when it first appeared in 1860, and it has continued to enthrall readers ever since. From the heros foreboding before his arrival at Limmeridge House to the nefarious plot concerning the beautiful Laura, the breathtaking tension of Collinss narrative created a new literary genre of suspense fiction, which profoundly shaped the course of English popular writing. Generally considered the first English sensation novel, The Woman in White features the remarkable heroine Marian Halcombe and her sleuthing partner, drawingmaster Walter Hartright, pitted against the diabolical team of Count Fosco and Sir Percival Glyde. A gripping tale of murder, intrigue, madness, and mistaken identity, Collinss psychological thriller has never been out of print since its publication in 1860. While Collinss other great mystery, The Moonstone, has been called the finest detective story ever written, it was this work that so gripped the imagination of the world that Wilkie Collins had his own tombstone inscribed: Author of The Woman in White.