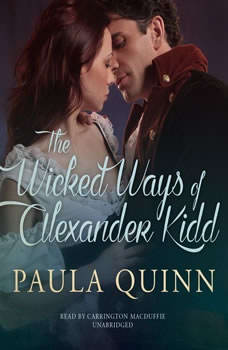 The Wicked Ways of Alexander Kidd

In the New York Times bestselling tradition of Lynsay Sands, Karen Hawkins, and Monica McCarty comes the second book in Paula Quinns new sinfully sexy Scottish romance series. An Innocent Stowaway As the sheltered niece of a Highland chief, Caitrina Grant longs for adventure beyond the lush hills of Scotland. So when a pirate ship glides into the loch, tempting her with promises of exotic lands and hidden treasures, Trina sneaks aboard. But she is unprepared for the consequencesand the seductive captain who demands the ultimate price for her deception. A Sinful Pirate For Alexander Kidd, the sea is no place for a lady. Pursued by deadly enemies from every direction, Alex wont rest until he claims the bounty of riches left to him by his father, the notorious Captain Kidd. A stowaway will not be toleratedno matter how beautiful. But fighting his desire for Trina soon becomes his toughest battle yet, and he will have to make an agonizing choice: sacrifice his quest or lose the woman who has stolen his heart.