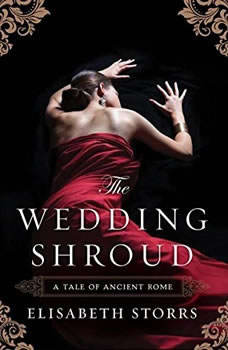 Series: A Tale of Ancient Rome #1

In 406 BC, to seal a tenuous truce, the young Roman Caecilia is wedded to Vel Mastarna, an Etruscan nobleman from Veii. Leaving her militaristic homeland, Caecilia is determined to remain true to Roman virtues while living among the sinful Etruscans. But, despite her best intentions, she is seduced by a culture that offers women education, independence, sexual freedom, and an empowering religion.Enchanted by Veii but terrified of losing ties to Rome, Caecilia performs rites to delay becoming a mother, thereby postponing true entanglement. Yet as she develops an unexpected love for Mastarna, she’s torn between her birthplace and the city in which she now lives. As war looms, Caecilia discovers Fate is not so easy to control, and she must choose where her allegiance lies.The Wedding Shroud is the first book in the series A Tale of Ancient Rome. Subsequent books in the series include The Golden Dice and Call to Juno.

A Tale of Ancient Rome Bundle

The Wedding Shroud
A Tale of Ancient Rome #1

The Golden Dice
A Tale of Ancient Rome #2

Call to Juno
A Tale of Ancient Rome #3