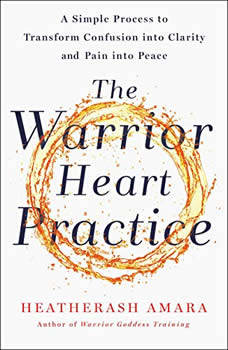 The Warrior Heart Practice: A Simple Process to Transform Confusion into Clarity and Pain into Peace

A revolutionary process based on the four chambers of the heart and rooted in Toltec wisdom that brings emotional clarity, healing, and freedom.

The Warrior Heart Practice is a powerful new method to reconnect with our sense of authenticity and inner-knowing and realign with our true nature. Author of the bestselling book Warrior Goddess Training, HeatherAsh Amara has trained extensively in the Toltec tradition under the tutelage of don Miguel Ruiz, author of The Four Agreements.

The Warrior Heart Practice is a revolutionary system based on the four chambered structure of the human heart. Walking through each of the four chambers—Feeling, Story, Truth, and Intent—listeners learn to take stock of their current emotional and mental state and reframe their situation in a new healing light. The process begins in the Feeling chamber as listeners accept the emotions they are currently experiencing without fighting or judging them. It then continues into the next chamber as listeners witness the Story that they are telling themselves. In the Truth chamber, they learn to thoughtfully and objectively evaluate the reality of the situation. In the final chamber, they learn to define and focus their Intent. The last phase of the practice is the most profound—taking the knowledge they have gathered from the four chambers, listeners then walk backwards through each of the four chambers, refocusing their Intent, Truth, Story, and Feelings based on what they’ve learned during the process.

The Warrior Heart Practice leads to deep insights as listeners learn to step outside of their preconceptions to realign with their true purposes and goals.