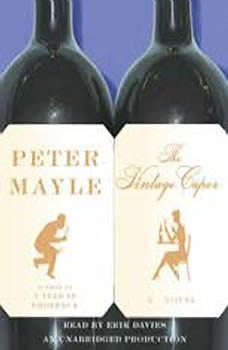 Set in Hollywood, Paris, Bordeaux, and Marseille, Peter Mayle’s newest and most delightful novel is filled with culinary delights, sumptuous wines, and colorful characters. It’s also a lot of fun.

The story begins high above Los Angeles, at the extravagant home and equally impressive wine cellar of entertainment lawyer Danny Roth. Unfortunately, after inviting the Los Angeles Times to write an extensive profile extolling the liquid treasures of his collection, Roth finds himself the victim of a world-class wine heist.

Enter Sam Levitt, former corporate lawyer, cultivated crime expert, and wine connoisseur. Called in by Roth’s insurance company, which is now saddled with a multimillion-dollar claim, Sam follows his leads—to Bordeaux and its magnificent vineyards, and to Provence to meet an eccentric billionaire collector who might possibly have an interest in the stolen wines. Along the way, bien sûr, he is joined by a beautiful and erudite French colleague, and together they navigate many a château, pausing frequently to enjoy the countryside’s abundant pleasures.

The unraveling of the ingenious crime is threaded through with Mayle’s seductive rendering of France’s sensory delights—from a fine Lynch-Bages and Léoville Barton to the bouillabaisse of Marseille and the young lamb of Bordeaux. Even the most sophisticated of oenophiles will learn a thing or two from this vintage work by a beloved author.

The Snowman
by Jo Nesbo

Internationally acclaimed crime writer Jo Nesbø’s antihero police investigator, Harry Hole, is back: in a bone-chilling thriller that will take Hole to the brink of insanity. Oslo in November. The first snow of the season has fallen. A bo...

The Gods of Guilt
by Michael Connelly