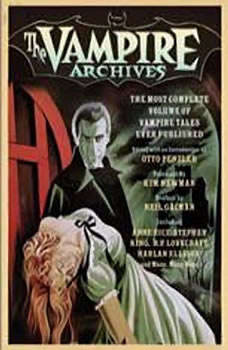 The Vampire Archives: The Most Complete Volume of Vampire Tales Ever Published

The Vampire Archives is the biggest, hungriest, undeadliest collection of vampire stories, as well as the most comprehensive bibliography of vampire fiction ever assembled. Dark, stormy, and delicious, once it sinks its teeth into you there’s no escape.

Vampires! Whether imagined by Bram Stoker or Anne Rice, they are part of the human lexicon and as old as blood itself. They are your neighbors, your friends, and they are always lurking. Now Otto Penzler—editor of the bestselling Black Lizard Big Book of Pulps—has compiled the darkest, the scariest, and by far the most evil collection of vampire stories ever. With over eighty stories, including the works of Stephen King and D. H. Lawrence, alongside Lord Byron and Tanith Lee, not to mention Edgar Allan Poe and Harlan Ellison, The Vampire Archives will drive a stake through the heart of any other collection out there.