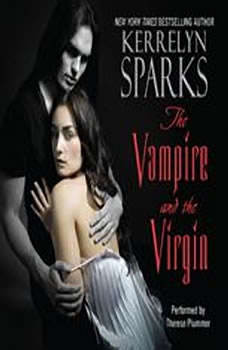 The Vampire and the Virgin

Olivia's packing list:1. Sunscreen2. Bathing suit3. Flip-flopsFBI psychologist Olivia Sotiris was looking for a cool ocean breeze, sand between her toes, and a break from her crazy, chaotic, and sometimes all-too-dangerous life. But when she escaped to the small Greek island of Patmos, all she got were meddling grandmothers trying to marry her off. Can't they see that none of the men around interests her—except Robby MacKay?Robby's packing list:1. Synthetic blood2. More synthetic blood3. Jogging clothes(even vamps have to stay in shape!)Robby needs to cool off, too, since all he can think about is revenge on the Malcontent bloodsuckers who once held him captive—but then he meets Olivia, the beauty with wild curls and a tempting smile. When a deadly criminal from a case back home tracks her down, Robby will have to save her life—along with giving her a first time she'll never forget . . .

The Vampire and the Virgin
Love at Stake #8