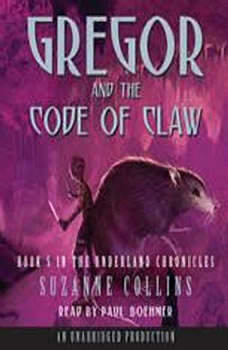 The Underland Chronicles Book Five: Gregor and the Code of Claw

Everyone has been trying to keep Gregor from seeing the final prophecy, The Prophecy of Time. It says something awful: It calls for the warrior’s death. The warrior being Gregor, of course. Now, an army of rats is quickly approaching and Gregor’s mom and little sister, Boots, are still in Regalia. The entire existence of the Underland is in Gregor’s hands and time is running out. There is a code that must be cracked, a new princess to contend with Gregor’s burgeoning dark side, and a war designed to end all wars.

In this suspenseful final installment in the acclaimed Underland Chronicles, Suzanne Collins unfolds the fate of the Underland and the great warrior, Gregor the Overlander, in a manner that can only be described as masterful.