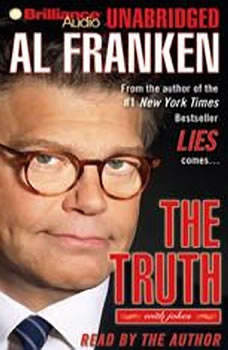 The Truth (with jokes)

Al Franken's landmark bestseller, Lies, and the Lying Liars Who Tell Them…a Fair and Balanced Look at the Right, was praised as a "bitterly funny assault" (The New York Times) that rang "with the moral clarity of an angel's trumpet" (Associated Press). Now, this master of political humor strikes again with a powerful and provocative message for all Americans.Because after Lies, comes The Truth….Al reveals the alarming story of how:• Bush (barely) beat Kerry with his campaign of "fear, smear, and queers," and then claimed a nonexistent mandate• Republicans decided that Terri Schiavo would make "a great political issue"• Conservatives sought to undermine Social Security by using a strategy borrowed from… Vladimir Lenin• Tom DeLay is just an absolute horror showThis is truly an audiobook for everyone.If you were a Bush voter, Al wants to set aside partisan bitterness and talk about the better future Americans can build together for their children, grandchildren, and great-grandchildren. (Generations beyond that will have to fend for themselves.) But first, Al must show you how Republican leaders are, at this very moment, betraying your trust and quite possibly lighting a Cuban cigar with a burning American flag or Bible.If you're a liberal, this audiobook is for you as well. Maybe even most of all. You will find evidence for what you already believe: that Al Franken is among America's finest prose stylists, and that the depravity of the Bush administration is only outmatched by the rot in the heart of the Republican Congress.And finally, if you are a member of a future generation who has found this audiobook in a pile of radioactive rubble, Al apologizes. Not because he didn't do his best to control the proliferation of nuclear weapons from rogue nations to non-state actors taking refuge in so-called "failed" states. But because his countrymen evidently failed to listen. In any case, enjoy the audiobook.

What a terrific book. Politics are described, clearly and with humor, in a way that everyone can understand how poorly we are being served by our current leadership. If Al has as much clarity in speaking to his audiences in his run for office, I am sure the next book will be by Senator Al Franken!

Franken's Cheney impression was my favorite. I can really appreciate humor based on irony. The book is filled with it. The book systematically reviews events before, during, and after the 2004 election. Franken makes a strong case outlining the deceptions that were perpetrated and accepted by the public. Instead of “Bread and circuses”, it was “Fear, Smears, and Queers”. A large portion of the American public has been hoodwinked by the current state of politics. I’m glad to see guys like Franken speaking out and saying what another large portion of America is saying (or maybe just me, I’m with ya Al!) The audio book is very entertaining and there are a few things in there I didn’t hear about in the mainstream media (surprise!), which were backed up by facts – you might just learn something.