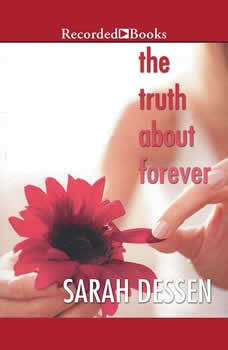 The Truth About Forever

Sarah Dessen is a New York Times best-selling author whose books have been named Best Books for Young Adults by the American Library Association on five occasions. In The Truth About Forever, Dessen depicts a young woman coming to terms with the tragic death of her father. Macy Queen likes order and control-that's the only way she can keep her grief from consuming her. But a summer spent working with a boy named Wes slowly begins to thaw the ice that's been surrounding Macy's heart. Wes teaches her that forever isn't always about goodbyes and love doesn't always have to hurt.

As her beautiful, self-assured image flashes across the TV screen, model Annabel Greene is the ideal 17-year-old girl-just crowned prom queen, escorted by a handsome hunk, and smiling broadly. But the glitter of Annabel's commercials is a far cry fr...

EGGS is a quirky and moving audiobook about two very complicated, damaged children. David has recently lost his mother to a freak accident, his salesman father is constantly on the road, and he is letting his anger out on his grandmother. Primrose ...

This Lullaby
by Sarah Dessen

From the award-winning and New York Times bestselling author of Once and for All   She’s got it all figured out.   Or does she? When it comes to relationships, Remy’s got a whole set of rules.   Never get too serious. Neve...