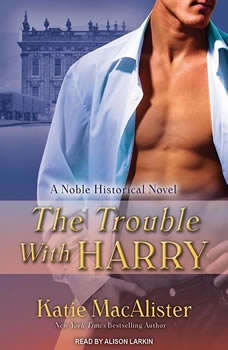 The Trouble With Harry

Just what is the trouble with Harry? 1. He is Plum's new husband. Not normally a problem, but when you consider that Harry advertised for a wife, and Plum was set to marry his secretary, there was cause for a bit of confusion. 2. He has a title. Plum has spent the last twenty years hiding from the ton, and now Harry wants her to shine in society? Horrors! 3. He doesn't know about her shocking secret. How is she going to explain about the dead husband who isn't a husband . . . and who now seems to be alive again? 4. He's fallen in love with her. And yet, the maddening man refuses to confide in her. For Plum knows the real trouble with Harry is that he's stolen her heart.

A poor widow, Lady Charlotte Collins returns to England eager to take her place in the ton, only to find herself shunned by all. Her one choice is to marry a groom with wealth, a title, and good looks, but Alasdair McGregor cruelly refuses to be the...

A Lady of His Own
by Stephanie Laurens

Stephanie Laurens’ scandalous fiction is savored by romance addicts around the WD who can’t get enough of her dashing rakes and ravishing debutantes. This sultry addition to her New York Times best-selling Bastion Club series present...

The Trouble With Harry
Noble #3