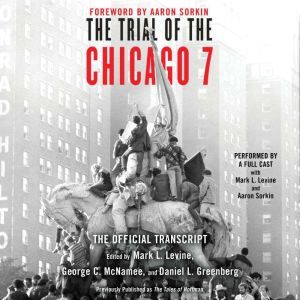 The Trial of the Chicago 7: The Official Transcript

The classic account of one of the most infamous and entertaining trials in recent American history comes thrillingly to life in this multi-voiced presentation of the courtroom transcripts that inspired the Aaron Sorkin film, featuring a full cast of acclaimed narrators led by J.K. Simmons, Jeff Daniels, Chris Jackson, John Hawkes, Chris Chalk, Luke Kirby, Corey Stoll, Norbert Leo Butz, and George Newbern.In the fall of 1969, eight prominent anti-Vietnam War activists were put on trial for conspiring to riot at the 1968 Democratic National Convention in Chicago. One of the eight, Black Panther cofounder Bobby Seale, was literally bound and gagged in court by order of the judge, Julius Hoffman, and his case was separated from that of the others. The activists, who included Abbie Hoffman, Jerry Rubin, and Tom Hayden, and their attorneys, William Kunstler and Leonard Weinglass, insisted that the First Amendment was on trial. Their witnesses were a virtual who’s who of the 1960s counterculture: Allen Ginsberg, Timothy Leary, Arlo Guthrie, Judy Collins, Norman Mailer, among them. The defendants constantly interrupted to protest what they felt were unfair rulings by the judge. The trial became a circus, all the while receiving intense media coverage. The convictions that resulted were subsequently overturned on appeal, but the trial remained a political and cultural touchstone, a mirror of the deep divisions in the country. The Trial of the Chicago 7 consists of the highlights from trial testimony with a brief epilogue describing what later happened to the principal figures. The courtroom’s electrifying proceedings are recreated by an ensemble of acclaimed narrators giving voice to the trial’s unforgettable cast of characters. This dynamic audio program brilliantly captures the urgency and unpredictability of the courtroom setting, taking listeners back to a turning point in our nation’s history, the outsize personalities at the center of the struggle, and their powerful words that still resonate today. The cast also includes Michael Boatman, Jay O. Sanders, Holter Graham, Jonathan Todd Ross, Corey Brill, Gibson Frazier, Pete Simonelli, Vikas Adam, Angelo Di Loreto, Lisa Flanagan, Kathe Mazur, and Jacques Roy. The book’s coauthor Mark L. Levine reads his Preface, and film director Aaron Sorkin reads his Foreword.