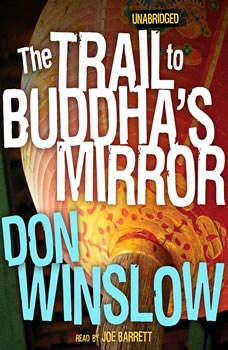 The Trail to Buddha's Mirror

Robert Pendleton is a chemical genius with a fertilizer worth a fortune to whoever controls the formula. Not surprisingly, the Bank, his notoriously exclusive backer, wants to keep an eye on its investment. But so does the CIA. And the Chinese government. And a few shadier organizations. So when Pendleton disappears from a conference in San Francisco, along with all of his research, Neal Carey enters the picture. Neal knows the Bank is calling in its chips in return for paying his grad school bills. He thinks this assignment will be a no-brainer—until he meets the beguiling Li Lan and touches off a deadly game of hide-and-seek that will lead him from San Francisco’s Chinatown to the lawless back streets of Hong Kong, and finally into the dark heart of China. In a world where no one is what they seem, Neal must unravel the mystery of a beautiful woman and reach the fabled Buddha’s Mirror, a mist-shrouded lake where all secrets are revealed.