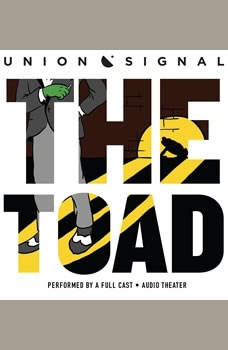 The Toad Retribution springs from the marshes in another thrilling adventure in the annals of Clovis DeWitt, alias The Toad. Script: Jeff Ward Production: Union Signal Music and engineering: Mark Ballora Artwork: Jimmy Dean Horn Cast: Jeff Ward David McDaniel Bob Sadler Trissy Callan Doug Bost Mark Ballora Steve Farrell David Rainey Priscilla Holbrook Mary Micari Michael Mabern Mike Giordano Union Signal is Jeff Ward and Doug Bost. From their ruined garage, they've been producing radio plays that have been heard on National Public Radio, Pacifica Radio, and Bavarian State Radio, as well as local stations across the country and Joe Bevilacqua's The Comedy-O-Rama Hour. Their plays have won awards with the BBC and the Midwest Radio Theater Workshop, as well as the Mark Time and Charles Ogle Awards.Doug Bost's screenplays include Diminished Capacity, Kubuku Rides (This Is It), Focus Group, and Policy of Truth. Radio plays include Dead Man's Hole, Roadkill, The Dan, and The Bride in the Box. His short stories have been heard on KCRW's Unfictional. Jeff Ward writes radio plays and musicals. He is the author of December 17, The Toad, Georgia, and the hard-hitting, impeccably researched documentaries Dorcus and October Surprise. He wrote the musical Take One and has written jokes for SNL's Weekend Update. Waterlogg Productions is a full service audio/video entertainment company, founded in 2002 by husband and wife creative duo Joe Bevilacqua & Lorie Kellogg. They are the proud distributors of Union Signal, whose plays have graced Joe Bev's The Comedy-O-Ram in its XM Radio incarnation. Together, Joe and Lorie have been responsible for over 150 titles distributed exclusively by Blackstone Audio. Check out their website at www.Waterlogg.com.

Emails Abroad is a play based on travels abroad relayed by e-mails between an ingenuous first-time traveler and her disillusioned home-bound sister. It culminates in their role-reversal, with the possibility of closure, a tragic end, or a new beginn...

The Trial of Sherlock Holmes
by Peter Davis; Matthew Woodcock

Sherlock Holmes, the world's greatest consulting detective, is on trial for his life!Trapped in a nightmarish court room and charged with endangering the public and his friends, Holmes is forced to relive some of his most bizarre cases with only Doc...

It's Valentine's Day, but events turn less than romantic when one of the members of a dating site is murdered. Can detective Jean-Pierre LePoulet find the killer?Recorded in front of an audience at the New Diorama Theatre, The St. Valentine's Day Mu...

The Mighty Carlins
by Collin Doyle

On the anniversary of his wife's death, Leo Carlin and his two sons come together for their traditional night of sharing the good and not-so-good memories of the dearly departed Mrs. Carlin. Beers are drunk. Plans are hatched. Secrets are revealed.T...

Some say having an open window while you sleep at night is a guarantee of good health. For young Ellen, it was an open invitation to allow all manner of scary things to enter her cozy little bedroom. As she grew older, Ellen discovered an open windo...

When Connie's beloved husband, Jack, dies after twenty-seven years of marriage, Connie hopes that her only son, Gary, will console her. Gary, however, finds that level of commitment a bit, well, too much of a commitment. Connie is left with interfer...

A hilarious collection of episodes from the beloved radio show Fibber McGee & MollyExcitable and loose-lipped Fibber means well enough, but it's not always easy for even-tempered Molly to keep him in check and out of trouble. Of course, the long...