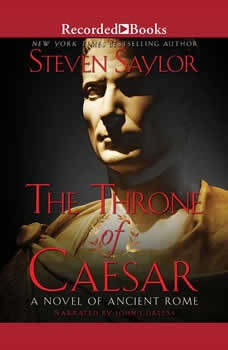 The Throne of Caesar

It's Rome, 44 BC, and the Ides of March are approaching. Julius Caesar has been appointed dictator for life by the Roman Senate. Having pardoned his remaining enemies and rewarded his friends, Caesar is now preparing to leave Rome with his army to fight the Parthian Empire. Gordianus the Finder, after decades of investigating crimes and murders involving the powerful, has set aside enough that he's been raised to the Equestrian rank and has firmly and finally retired. On the morning of March 10th, though, he's first summoned to meet with Cicero and then with Caesar himself. Both have the same request of Gordianus-keep your ear to the ground, ask around, and find out if there are any conspiracies against Caesar's life. Caesar, however, has one other important matter to discuss. Gordianus's adopted son Meto has long been one of Caesar's closest confidants. To honor Meto, Caesar is going to make his father Gordianus a Senator when he attends the next session on the 15th of March. With only four days left before he's made a Senator, Gordianus must dust off his old skills and see what conspiracy against Julius Caesar, if any, he can uncover. Because the Ides of March are approaching...

The Throne of Caesar
The Roma Sub Rosa Series #16