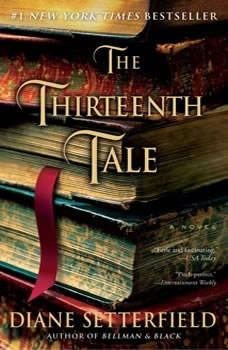 When Margaret Lea opened the door to the past, what she confronted was her destiny. All children mythologize their birth. . . . So begins the prologue of reclusive author Vida Winter's beloved collection of stories, long famous for the mystery of the missing thirteenth tale. The enigmatic Winter has always kept her violent and tragic past a secret. Now old and ailing, she summons a biographer to tell the truth about her extraordinary life: Margaret Lea, a young woman for whom the secret of her own birth remains an ever-present pain. Disinterring the life she meant to bury for good, Vida mesmerizes Margaret with the power of her storytelling. Hers is a tale of gothic strangeness, featuring the Angelfield family -- including the beautiful and willful Isabelle, and the feral twins Adeline and Emmeline -- a ghost, a governess, and a devastating fire. Struck by a curious parallel between their stories, Margaret demands the truth from Vida, and together they confront the ghosts that have haunted them. The Thirteenth Tale is a return to that rich vein of storytelling that our parents loved and we loved as children. Diane Setterfield will keep you guessing, make you wonder, move you to tears and laughter, and in the end, deposit you breathless yet satisfied back upon the shore of your everyday life.

Speaking from Among the Bones
by Alan Bradley

NAMED ONE OF THE BEST BOOKS OF THE YEAR BY NPR • NEW YORK TIMES BESTSELLERFrom award-winning author Alan Bradley comes the next cozy British mystery starring intrepid young sleuth Flavia de Luce, hailed by USA Today as “one of the mo...

If you liked the Century Trilogy, you’ll love the “extraordinary...monumental masterpiece” (Booklist) that changed the course of Ken Follett’s already phenomenal career.“Follett risks all and comes out a clear winner,&r...

The Dressmaker
by Kate Alcott

Just in time for the centennial anniversary of the sinking of the Titanic comes a vivid, romantic, and relentlessly compelling historical novel about a spirited young woman who survives the disaster only to find herself embroiled in the media frenzy...

Creepy , but lacking in plot for my taste. About a third of the way through, I got impatient to finish and find out if anything interesting would happen. Not a good sign.

This story starts out somewhat slowly....but if you can hang on till it gets interesting it's hard to stop listening. Setterfield paints some beautiful and terrible pictures for her reader/listener, and I enjoyed the twist at the end.

A really good story, well written and an ending that brings it all together. I really enjoyed this book.

This is a gothic novel in the best sense a horrific tale told in mannered, finely wrought prose. It is among other things a paean to story telling wrapped in an ever surprising story. Anyonr who loves a good story should give it a try.

The story of Vida Winters reminded me of the earlier books by VC Andrews that I couldn't help but be drawn into this story. The ending was a surprise that wrapped up nicely.