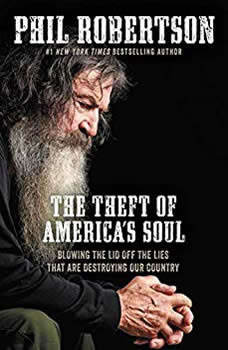 The Theft of America's Soul: Blowing the Lid Off the Lies That Are Destroying Our Country

Star of A&E's Duck Dynasty, Phil Robertson exposes the ten lies the devil has used to destroy America's soul and offers ten counter-truths to put God back into culture and turn the country around.

In April of 1966, Time magazine raised a ruckus when the cover of the magazine featured in red block-letters a now-infamous question: "Is God Dead?" It marked a turning point for the country, revealing the cultural acceptability of questioning whether God was active and alive in our world. Circumstances have not improved. In his new book,Phil Robertson exposes the 10 essential deceptions and schemes the devil has used in an attempt to steal, kill, and destroy America's soul. With personal narrative and folksy wisdom, Phil shares the ten counter-truths that, if believed and acted on, would put God back into the culture and might just turn our country around. His most prophetic work to date, the new book is deeply rooted in Phil's desire that all might come into the life-giving, peace-filling, wholly-transforming experience of God's great love.

In this reasoned exploration of justice, retribution, and redemption, the champion of the new monastic movement, popular speaker, and author of the bestselling The Irresistible Revolution offers a powerful and persuasive appeal for the abolition of...