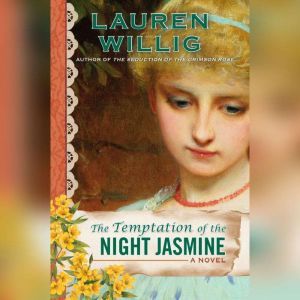 The Temptation of the Night Jasmine

After years abroad, Robert, Duke of Dovedale, has returned to England to avenge the murder of his mentor. To uncover the murderer's identity, he must infiltrate the infamous, secret Hellfire Club. But the Duke has no idea that an even more difficult challenge awaits him-in a mistaken, romantic-minded young lady.

Charlotte Lansdowne wistfully remembers the Robert of her childhood as a valiant hero among men. Too aware of his own flaws, Robert tries to dissuade Charlotte from her delusions, even as he finds himself drawn to her. When Charlotte takes up a bit of espionage-investigating a plot to kidnap the King-Robert soon realizes that she is more than the perfect partner in crime.

Caught in a dangerous game full of deadly spies and secret rites, Robert and Charlotte must work together to reveal the villain...and confront their true love.

It pains me to say this, as I am a HUGE fan of this series, but this one was my first disappointment of the series thus far. I guess I expected more interaction with the Pink Carnation, and she wasn't even seen in this book. There were only two other main characters Miles & Henrietta that appeared in this installment, and the rest were non-existent, which left me a bit disinterested. I was intrigued with the furthering of the relationship between Colin & Eloise, and the possibility that Colin might be something other than what Eloise thought no spoiler given here. As far as the narrator - fear not, my fellow fans, I've spoken directly to the author, and she told me that the fill in that had to read this book was only temporary, because Kate Reading had a last-minute scheduling conflict and had to back out. She WILL be back for the next few books coming!